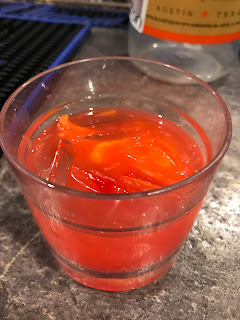 The unusual hue of this Old-Fashioned reflects the unconventional mix of ingredients that went into it. We are all well-acquainted by now with the standard set of elements that goes into a textbook Old-Fashioned, and indeed there are few drinks more satisfying than the classic, but far be it from me to stand in front of progress by discouraging an artist from adding more colors to her palette, assuming textbooks have palettes. The end result was far sweeter than just about any Old-Fashioned I've ever had, the already sweet Bourbon only amplified by the saccharine chorus of the other ingredients. I wonder what this would have tasted like with rye whiskey - to return to the painting metaphor, would the rye have balanced out the oranges and bitters/grenadine in a color triad, or would it have been too jarring? As it was, I didn't really taste the bourbon at all, and the cherry/pomegranate/orange flavors washed together in a muddled watercolor of berry and citrus. I think I would have enjoyed a traditional Old-Fashioned more, although I appreciated the experiment. It's hard to improve on an Old-Fashioned! That's the problem with experimentation: it's essential to progress, but not all of them work. At least with drinking experiments, you still get drunk. 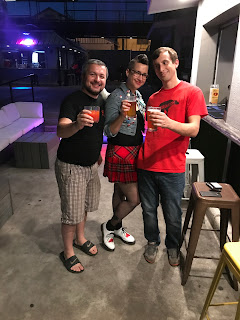 
Clearport is more of a concert venue and dance club than a bar, though like any good club it has its little nooks of seating and relaxation tucked away for patrons to enjoy in between , rounds, sets, twerking sessions, or what have you. In terms of design there's a pretty cool multi-story layout, with long upper-level catwalks and landings looking down on the main concert stage that almost reminded me of an FPS level, although I assume that the only monster kills happening here involve energy drinks. I bet there have been some great Instagrams taken from the upper deck. The venue had the melancholy air of a ghost town during our visit, despite being mere yards away from the ROT rally, the largest motorcycle rally in the US. We spent a while on the top level enjoying the spectacle below, savoring the scent of E15 gasoline and the pops and growls of some truly odd-looking bikes promenading down the street. All public gatherings are built on ritual, and the display of customized chrome is quite a thing to behold from a distance. I'm not any kind of motorcycle buff, having internalized the warnings in Hunter S Thompson's classic essay The Song of the Sausage Creature at a young age, but everyone likes a parade, and there are far worse candidates for the stars of a parade than a gleaming new superbike with glowing green accents. There are worse places to watch one, too.
Posted by Aaron at 7:00 PM No comments: 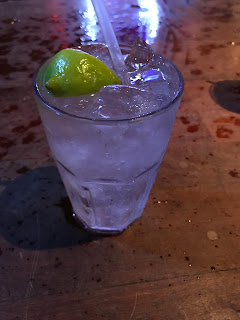 Asking a Coyote Ugly bartender what drink best represents the bar is a risky proposition, one of those bets that's almost all downside. The answer could be a warm Michelob Ultra at best to a $20 body shot at worst, and though I have so far been firmly dedicated to the principle of Dealer's Choice, only a fool stands on principle at Coyote Ugly, especially on a Saturday night, when ordering at the bar is basically reenacting that "Jim, Jack, Johnny Red, Johnny Black, and Jose; all my favorite men. You can have it any way you like it, as long as it's in a shot glass" scene from the movie. I declined to endure the farce of custom drink negotiations and just ordered my go-to. A gin and tonic is nearly impossible to ruin, making it the perfect port in the storm of a weekend rush. This wasn't a great $6 G&T, a watery, over-iced, sub-well quality concoction of disappointment in a plastic cup, but as a way to get us in and out in the shortest amount of time possible, it was worth every penny and then some. 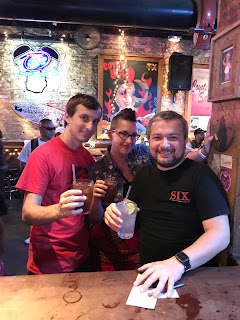 
No matter what city you're in, a Coyote Ugly is almost guaranteed to be the worst bar in town. What makes it so bad? Much like Bikini's, it targets an inherently unsatisfying market niche that combines the worst qualities of both a bar and a strip club without the upsides of either. For the bargoers, you get hammered-drunk out-of-town patrons and overpriced drinks; for the strip club aficionados, you don't get nudity but you do get blaring music and depressingly lame body shots, and you can even throw in the special kind of forced are-we-having-fun-yet desperate titillation of a Hooters or Twin Peaks. Even the mechanical bull at Trophy Room seems better in comparison, and in terms of bars with movie ties, Coyote Ugly is no Cheers, or Cocktails and Dreams - it's not even a Paddy's Pub. Can you tell I don't like this place?

In Coyote Ugly's defense, it's probably not literally the worst bar in town. There weren't any bugs in my whiskey like at 311 Club, or bugs crawling around on the bar like I've seen at The 04 Lounge, or any bugs at all actually. The sight of drunk girls dancing on a bar should raise a smile on the face of just about anyone - young or old, man or woman - and I imagine on a less crowded night you might actually get a chance to talk to the girls ("coyotes") and enjoy a more personalized experience. On a crowded night though, it's just a well-executed version of a lousy concept that somehow remains in business thanks to people who don't know or don't want any better, plus lame completionists like me. What a sobering thought - the idea of your own complicity in the very spectacle that you're decrying. Best to shelve those disquieting notions and move onto the next bar as quickly as possible, which we did.
Posted by Aaron at 7:00 PM No comments: