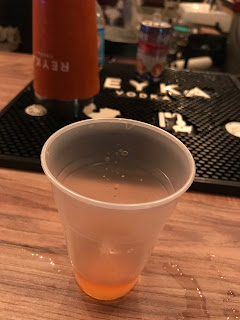 Yup, that is definitely a shot of Jameson whiskey in a plastic cup, the drink that my bartender decided best represented the bar. You know, sometimes when I'm writing these posts, trying to capture my reactions to the wildly varying quality of drinks I receive, I have to smile about how subjective life is. In a lot of contexts, this would be a comically terrible drink to offer someone, bordering on insulting - here I am at this fancy craft cocktail lounge or other upscale joint, and you're serving me like I'm a college sophomore at an afterparty? In this context, though, it was both funny and appropriate for the venue, exactly what we needed. I have nothing left to say about Jameson whiskey itself after the countless times I've discussed it - it remains this popular for a reason - but as an instrument for expressing this bar, a friendly place in a transitional period, it was perfect. 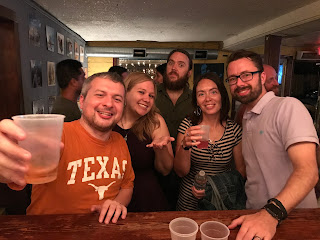 
​I knew when I started on my quest that I would be fighting against the natural entropy of bar closings, remodelings, and relocations, but I did not expect one of the victims to be one of my favorites. Rio Rita closed in December of 2016 and moved its incredibly potent Bloody Marys over to 12th and Chicon, leaving its old spot on East Sixth to be inhabited shortly afterwards by Latchkey. There's a full redesign pending, but if you go to Latchkey right now, expect a fairly Spartan interior: all bare shelves and blank walls, like the house of of a college student in West Campus circa the 90s who hasn't finished moving in and unpacking all the boxes despite the semester being nearly half over. It has the atmosphere of a post-exam house party, with the owner and bartender as the older students in grad school who can legally buy alcohol to entertain impressionable young undergraduates, so there's cheap well whiskey and even cheaper clear plastic Solo cups, unframed pictures on the wall and a ping pong table tucked away in a side room, the intimates of the host gathered around the dart board while the tangentially invited friends-of-friends cluster at the couches to the front and chat to each other. We weren't there for long enough to start smoking clove cigarettes, drinking rare European unfiltered absinthes, or discuss the Lacanian psychoanalytic underpinnings of the films of David Lynch, but I wouldn't have been surprised if a colloquium on Hegel had broken out any minute. I was genuinely surprised no one started passing a bottle around. I can't wait to see what the owner does with it in a few months.
Posted by Aaron at 11:57 AM