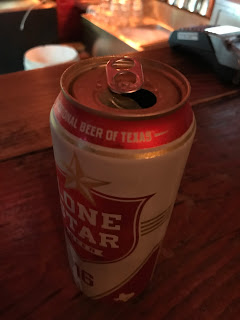 "We're a dive bar, man, so what you see is what we are." Thus spake the bartender, shortly before handing me a Lone Star, which is for me the beer that truly defines not just Sixth Street, but a huge percentage of my drinking life. I know that Austin Beerworks' Pearl Snap is the "official beer of Austin", and that there are plenty of other pale lagers that rank even higher than Lone Star on review sites, and there are hundreds of individual beers on tap across the whole length of the street, but for me it doesn't get any simpler than a Lone Star. Even though its parent company Pabst is now partly owned by a Russian and headquartered in LA, which I can hardly believe, Lone Star itself has such a strong connection to Texas that no one would mistake it for anything other than a cheap and reliable standby beer. This was only the second time I had been recommended it, and the first on its own. But as long as your tastes run towards the cheap and simple, you can't go wrong with anything else here. 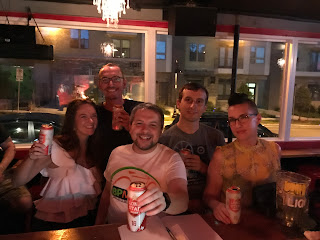 
The bartender was exactly right about what kind of a joint this is; among my circle the Eastern possesses a certain amount of infamy for its particular brand of squalor and peculiar clientele. Though property values on East Sixth are rising fast enough to make your head spin, The Eastern remains resolutely low-rent; the kind of place where, when you're asked what kind of whiskey you want, the answer is always "well". Normally they have live music, typically hip hop on the weekends, but this Wednesday was fairly silent. That gave us the space to start chatting with the bartender about the venue, its history, and Austin more generally, but you shouldn't expect that kind of intimacy on regular nights, when it's all about inhaling as many cheap but potent drinks as possible and seeing what kinds of fascinating people you bump into.
Posted by Aaron at 7:00 PM