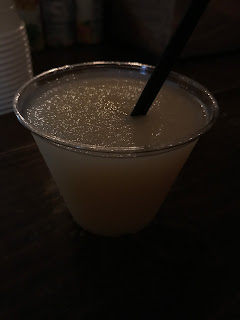 For this night only, their specialty drink got renamed to "The One With Whiskey" because there was a Friends trivia night going on when we visited. Much as I'm sure everyone is dying to hear my opinion of Friends, it has nothing to do with the drink, which I would have preferred on the rocks. Just as with all frozen drinks, the Irish Tenant forces you to drink it slowly. I'm not sure if this is one of those angry-old-man things, but I've found myself increasingly irritated by drinks that force me to go at their pace and not at mine, even if taking it easy might be a good idea after a few rounds. If I want to pass out in the gutter like a Flann O'Brien character that's my right! I had never heard of Jameson's Caskmates brand, but it's interesting - a whiskey that's aged in a barrel that was previously used to condition a stout, which was itself conditioned in whiskey barrels. The circle of life complete! You are unfortunately not able to taste any of this cosmic journey through the whiskey Lifestream because the drink is so damn cold; that's what happens when you turn what would have been an excellent cocktail into a snowcone flavor. However, the drink itself was still not bad at all, with a pleasant sweet taste, and it even introduced me to a new and excellent type of bitters, which is from Austin. Not bad! 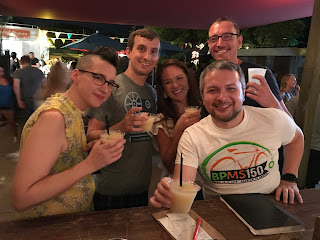 
For a long time, like years and years, I wasn't really sure what the deal was with The Volstead and its next door neighbor Hotel Vegas, so eventually I did what I should have done from the very beginning and just asked the bartender: it has the same owner but a different manager than its sister bar. Mystery solved! There's a very loose separation between the two, and I've seen drunk people try to cross back and forth many times. This is the more bar-focused venue, as opposed to the more show-focused Hotel Vegas, though there is often a DJ for regular hip hop nights. When we were there it was Friends trivia night, as I said, so every square inch of the spacious outdoor patio was crammed with people who wasted their lives memorizing details of that terrible show. Those people made it a drag to get to the awesome food trucks in the back, to get more of the great drinks from the bar - it was awful! Nothing is worse than other people having a good time that has nothing to do with you.
Posted by Aaron at 8:00 PM