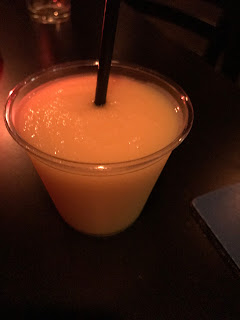 This tasted like a frozen dreamsicle version of the screwdrivers I drank a ton of in college: cheap, boozy, delicious, but extremely cold. Weirdly, the was the first time I had ever tried their most famous drink, even though I've been to Violet Crown dozens of times. In my defense, their regular drink prices are so good - $3 wells, $2.50 Lone Stars, cheap craft beers - that I didn't even think to try the special. Also it's frozen, and I generally don't like frozen drinks since I don't like having to fight brain freeze to get drunk. But once you accept the idea that this is a drink for sipping it makes sense, because this is the definition of a potent potable. I wouldn't want to have to operate heavy machinery after a few of these, and though I had not had a screwdriver in years before this drink, taste by taste it brought back all kinds of pleasant memories, because there's something about a screwdriver's flavor that never fades - the sweetness of orange and the sharpness of cheap vodka took me right back in time, to endless nights of drunken fun with friends. Taaka vodka and Simply Orange might not be a madeleine for everyone, but it brings me right back. And in the heat of summer, even anyone else should welcome one of these as well. 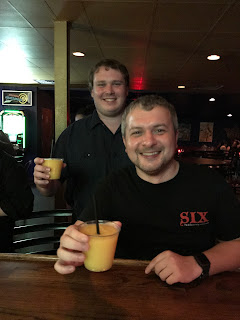 
I consider all the bars in this family - Barfly's, Mugshots, The Hideout, Bender, Pour House, Pour House Pints & Pies - as some of the last redoubts of traditional Austin drinking culture, which is interesting since Marcos, the owner, is an El Paso native. Regardless, he's got a formula that has worked perfectly everywhere he's tried: solid drinks, strong pours, great prices, and good crowds. Each one of the bars he owns is like the optimal version of whatever it's around, and so Violet Crown is just about the perfect East Sixth bar. You get the same impeccable bar service and affordable prices that all of this series of bars has, but with the expected eclectic hip crowd, some slightly fancier drinks, a decent patio (though it could be bigger), and excellent trailer food, with the first installation of what is now the pizza empire of Via 313 still parked right out front making phenomenal Detroit-style pizzas until late at night. I know I sound like a paid marketing shill, but in a city with as many bars as Austin has, and and especially with such pointless soul-searching agony over what makes something "authentic" or not, it's just really refreshing to find a bar where the biggest worry you'll have is when the next visit will be.
Posted by Aaron at 12:26 PM