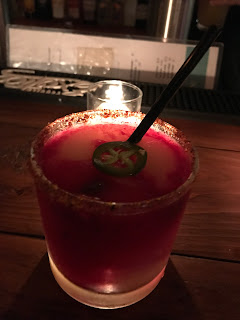 The first three quarters of the recommendation here were excellent, but it's a shame about the home stretch. Another aspect of frozen drinks I dislike that I haven't talked about much - besides the dulling of flavor and the potential for brain freeze if you try to drink at your own pace like a normal person - is the way that frozen drinks change flavor as you get to the end. Just as no one likes the ice cream soup left over from an over-filled bowl of it, the tepid watery remnants of even the most well-crafted frozen cocktail are almost guaranteed to disappoint. At the beginning, this was an excellent blend of sweet prickly pear (props on using that ingredient) and spicy jalapeño with chili salt (double props on that intriguing mixture of salt and spice). Even into the mid-drink phase, when we were standing around chatting, it remained a really tasty and boozy margarita. But 20 minutes later, the tequila had separated from the purée and syrup, leaving a film of liquor over a sickly-sweet stickiness, becoming more drinkable just as it become less appetizing. That's not the drink's fault: it's not bad, it's just mixed that way, and I bet if it had been made on the rocks I would have loved it to the end. If you can drink this faster than I can you will love it more, and their non-frozen drinks do not suffer from any of these flaws. 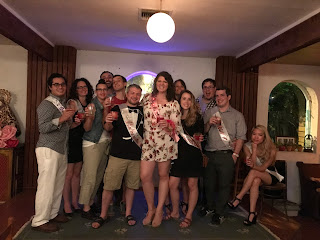 
The original Tamale House was one of those long-standing local joints that left a large shadow when it closed, as did its other descendants. In just one of the many ways I have failed to uphold the required cranky old Austinite standard, I failed to visit the mother restaurant when it was still in business, but maybe visiting the daughter counts as a penance, even if I neglected to try any of their legendarily massive tacos during my visit. The current incarnation of the Tamale House spirit is a surprisingly large restaurant with an even more surprising amount of parking out front - it might be the single largest property on East Sixth that I've visited so far. When we visited on a Saturday night there were a few other couples in some of the side tables, but we were able to command the central area (and center stage) no problem. They have a patio as well, but we were in more of an air conditioning mood. Though it is more of a restaurant than a bar, they have enough space to host events and act as the anchor for the Tamale House lineage into the future.
Posted by Aaron at 3:13 PM