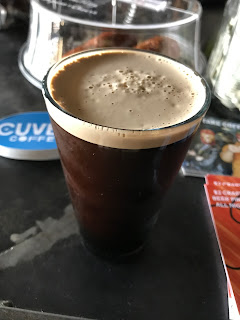 There's a lot of great beer at Cuvée, more than you'd expect to find at a traditional coffee shop but right in keeping with combo coffee/bar joints like Radio, Cherrywood, and Thunderbird (RIP Strange Brew) that like to cater to a wide audience. Cuvée does really great coffee, though I'm far enough from a coffee snob that I couldn't pretend to offer an expert opinion. You can find plenty of unhappy pieces calling cold brew a garbage disposal for extra beans and the like, but I found this union of beer and coffee to be excellent. The Black and Brew is a play on the Black and Blue, their nitro cold brew coffee, which they mix in with a porter. They can change up which porter is paired with the coffee, but luckily this time I was given the 512 Pecan Porter, which has been my favorite porter ever since I first tried it. It's a little bit sweeter than most porters, but that actually goes really well with the nuttiness of pecans. And then when you add the smooth flavor of their coffee - oh man! Refreshing and delicious. 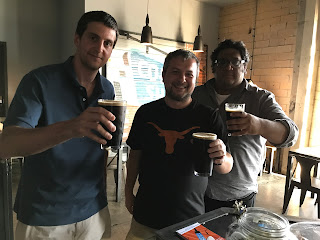 
The term cuvée means "blend" or "batch" in French, and it typically refers to a particular run of a product, usually wine. The name makes sense given Cuvée's origins as a roaster of several varieties of high-end coffees. They moved to this location about three years ago, which gave them much more room for their operations as well as a little café space that reminds me of a brewery. They have a solid beer selection on their tapwall, as well as some wine and other more exotic concoctions like brewchata. I appreciate that they have locally sourced food like pastries and Tacodeli breakfast tacos to go with their other products - a warehouse generally doesn't emit the kind of inviting coffee shop vibes that you're accustomed to (and I expect that the café is fairly ancillary to their main wholesale operations), so every little bit of attraction helps, even if they're already fairly well-known around the city for the quality of their coffee and their ubiquitous cans of cold brew. However, even if their coffee was terrible (which it definitely isn't), they deserve plenty of fame as well for heroically defending common sense beer distribution, when their crowler machine was seized by those spoilsports at the TABC and they prevailed in court. Next time you fill up a crowler, thank these guys for standing up for beer drinkers everywhere.
Posted by Aaron at 5:00 PM