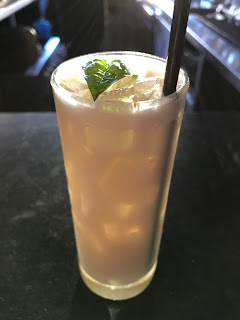 Out of all of the intriguing high-end cocktails on the Originals portion of the menu, I thought the bartender made one of the most intriguing picks. Based on the name, you might think that it was a home-rolled variant of a michelada, but instead it's almost closer to an alcoholic version of a Thai soup broth without the sour and spice, if that makes sense (probably not - just work with me here). The coconut milk is the primary flavor here, so it's very smooth, and the ginger adds a little kick. You really can't taste the rum at all, although there was a solid pour, so you're just left with a pleasant cocktail that leaves you ready to tackle the next drink. The rest of their cocktails run the full gamut of liquors from seemingly all over the world: the expected vodka, gin, bourbon, and tequila being joined by the rarer scotch, pisco, mezcal, and even Becherovka, a Czech herbal liqueur I'd never heard of before. We tried a fair sampling and they were all good, so if a rum cocktail isn't exotic enough for you (or for some strange reason a drink that reminds you of tom kha doesn't sound appetizing) you can still order with confidence. 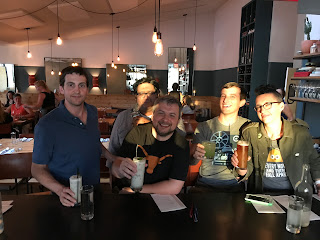 
I've never been to Contigo, the upscale restaurant which eventually spun off this successor, but it maintains a high-enough standard that I bet its most famous progenitor is also pretty nice. When we visited it seemed like most people were here for the happy hour, to score some cheap snacks, selected cocktails, whiskeys, and most of all wine - judging by the legions of drained glasses on the tables around us it seemed like every group but ours was on a mission to drink Chicon clean out of rosé. I really liked the interior: clean wood panels, exposed lights, a white ceiling floating like a big cloud over blue walls.... As far the food is concerned, we didn't try any, but what we saw looked appetizing. They seem to be going for more of a neighborhood hangout concept as opposed to a high-end destination restaurant concept, although I looked at a menu and a $15 fried chicken sandwich had better be pretty spectacular. The crowd was mostly young professional women (hence all the rosé), so if that's your demographic, either member-of or looking-for, you could do worse than Chicon.
Posted by Aaron at 5:30 PM